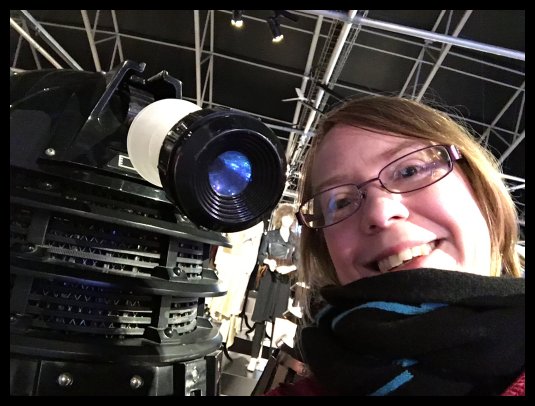 It's me, with a Dalek!
All about the artist!
Hi! You've reached the page about me, so you obviously want to know more.
My name is Lara and I live in England, though I want to move to the USA, or at least somewhere more inland. I live with my parents, cat, Aibos, fish and 2 guinea pigs. I love ghost hunting, urban exploring, going to music gigs and live wrestling shows and geeking out over my fave fandoms. I'm also a YouTuber, making videos about robots and other toys!

I have been drawing ever since I learned to hold a pencil. I was often told off at school for doodling all over my books while the teacher was trying to tell us something very educational but completely boring. I watched cartoons nearly all my life and used those to help me with my own art to begin with. Through using other styles for inspiration, I blended them all together and finally came up with my own style that I am happy with.
My favourite 'toons growing up were Rude Dog and the Dweebs, Widget, Teenage Mutant Ninja Turtles (they called them "Hero" Turtles over here for a while since the word "Ninja" was deemed too violent), most of the Warner Brothers cartoons, Hot Rod Dogs, Bucky O Hare, Captain Simian and the Space Monkeys, Gravedale High, Sonic the Hedgehog (in his various series that had nothing at all in common really) and a multitude of others, too many to name. Growing up in the 80s helped because I think back then cartoons were getting popular and there was a craze for them, so many imaginative ones. Aside from cartoons, I also like stop motion animation, such as Tim Burton's work and Aardman Studio's creations. It bugs me a bit how CGI is taking over. It's good in its place but it seems to be taking over from 2D animation which is sad since I think there is a quality to 2D that is unique and special.
I did Advanced GNVQ IT for two years at college and one year of Media Studies. I have been using a computer in a big way since I was 13 and am pretty familiar with most of the main graphics programs available at the moment.
I have a diploma with merit in pet portraits.

Growing up, I used to write stories and comics of my characters, mostly about my pets and my cuddly toys. I did a monthly magazine just for fun and that lasted about 4 years. Now I look through these magazines and see how much my drawing has improved, so its an interesting piece of personal history. For my Art mock GCSE I bought my guinea pig in as my drawing subject and for my main GCSE, I drew my friend's mouse she bought in. I got A's in both. However in college (6th form) I got a a B in my first year and a C in my second year. You can imagine my disappointment. However my teacher told me my art was too commercial for the exams. They focused on fine art. But that wasn't a complete loss. Commercial art is useful for the type of career I want to pursue and many people have been impressed by my work so I keep at it.

Type of art I do? Mostly cartoon, my own characters and a small amount of fanart, (you might want to check out my deviantART gallery if you want to see more of that). I also draw realistic animals, fantasy (dragons and other creatures) humans and cars. Cartoon cars of course! I also sculpt in Premo Sculpey polymer clay.
Mediums I use? Mainly Crayola coloured pencils. Not very professional or expensive but they work for me. However, I do have a set of Prismacolors I use for some work. I do my digital art in Paint Tool SAI, Paint Shop Pro and Photoshop. I paint on t-shirts and have made things in many different materials such as paper maché and felt. I also make and sell custom plushies and I have published two fantasy novels as well.


So now you know a little about me and what inspires me. Hope you enjoy your stay at Silvolf Studios!
~Lara 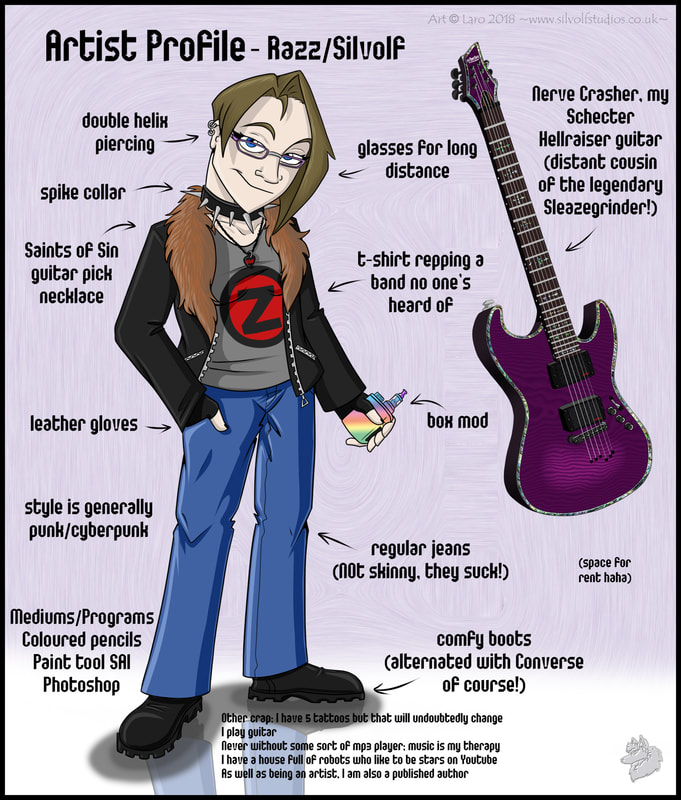 Some of my Inspirations 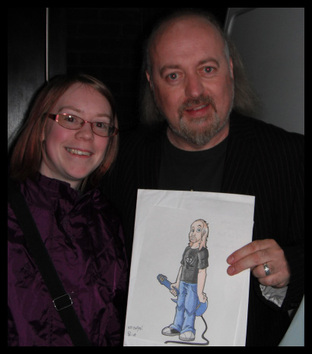 Here I am with someone who is a great inspiration to me; Bill Bailey! He's a comedian and a musician too and I've met him three times and seen him live four times. I gave him a picture I drew of him. He makes me laugh and I love how he can seemingly play ANY instrument and the unusual ones he plays on stage like the theremin, ood and Tenori-on. He's in a lot of TV shows too like QI and a few series and movies such as Black Books and Hot Fuzz.
I love his unique brand of humour and seeing him perform live on stage is amazing. My head hurts from laughing so much. Someone who can bring so much laughter and joy to people is definately someone to aspire to and I try to make at least one person laugh every day so that I too spread some joy.
I also hope one day I can play my guitar as well as Bill Bailey plays his!
I enjoy all kinds of media, both televised and of course art and I have also appeared in a couple of music videos that some friends of mine did. Saints of Sin are a UK band and good friends of mine, you may have seen some of the artwork I have drawn for them around the site. I surprised them with a poster that promoted their second album, Welcome to the Circus, which I and other fans actually helped fund and 100 prints of this poster were sold at their gigs, signed by myself and the band as well.
I was an extra in two of their videos, which you can see below; 21 Shots and Uptown Funk (a cover of a popular Bruno Mars song), respectively. I have included screenshots of the scenes that I appear in as well.
Disclaimer: All artwork is © Lara Ryan. DO NOT take, redistribute, alter or claim the characters as your own. Ask permission if you would like to use my images and always give me credit if you do. Lack of imagination is not an excuse, plagiarism is a crime.
Powered by