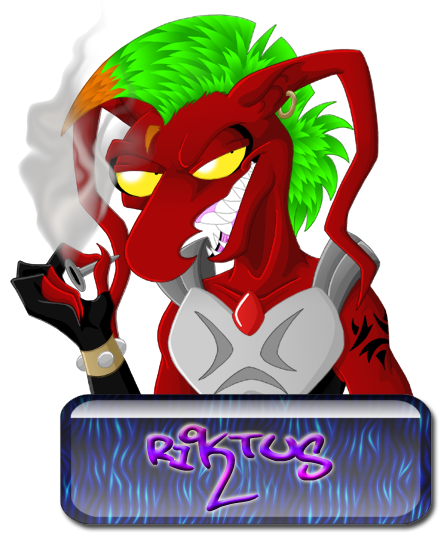 Riktus Rinktus - The Meta Bug you don't mess with
I hardly ever make new characters anymore. There was a time I would make several every single month but my inspiration just ran dry. Anyway this guy only exists because he was in a dream I had. There was this alien bug thing in it. He was kinda humanoid but with a bug head. And he had long ears that ended in antennaes. I call them antennears. He's a pilot.
So I drew a pic and my brain was working in overdrive all the time too. I thought to call him Rinktus. Then I was telling Mum about it and said his name was Riktus. I got it wrong and when I went upstairs and saw I thought of Rinktus originally, I didn't know which name to give him. Mum said Riktus has something to do with death (yes I've misspelled it on purpose) and that fits him if he's a weapons expert but I thought Rinktus sounded really cool. So I used both names. He's called Riktus Rinktus.
He's a Meta Bug which is short for Metalarkus Bugulatus (Metal-arr-kuss Bug-yew-laa-tuss) As in, it sounds like Bug you lots....well kinda. He bugs people. He's a bug who bugs people. He's also a heavy swearer. On his home planet of Kresnar, swear words in his native language are enough to induce vomiting.
He's the weapons expert on the Paragon, a living ship. Except the Paragon is paranoid. Paranoid and Gone. Paragon. Get it? The ship is a wimp and runs from battle. The whole Riktus thing, well I looked it up to see exactly what it meant. Rictus, its like a wide open mouthed twisted grin, sometimes people who have died of shock get this expression on their face. So I made up this whole thing about Riktus being able to dislocate his bottom jaw.
He's got a massive proton blaster and partial body armor. He was using those on the steering wheel of the jet in my dream. He's got rocket jets in his boots to boost his flying power. He has a tailspade like a character in my book. And purple bug wings. I love the fluffy tufts of hair at the back of his head. He has a gun holster which usually contains his silver laser pistol. He's got an earring in his left antennear and a tattoo of a Meta Bug death symbol on his left shoulder. His wings have tears in them. And he has a shortish tail. All my characters have long tails but his won't touch the ground if he holds it straight down.

He's very fast and can dodge anything, plus the armour helps, he's addicted to a powerful concoction of drugs he mixes himself; he smokes a weird pipe thing and it contains a cocktail of powerful drugs. It is self lighting. The stress of battle and the stupid ship he controls the weapons for trying to fly away from battle all the time caused him to get addicted. So he started doing drugs to help with it. Except he came to rely on them. If anyone else smoked his pipe, the concoction would kill them. He takes it in such a high dose, its lethal to anyone else. He rarely gets high. He's been without the pipe on two occasions and he gets such horrid withdrawal he tends to go crazy with anger and annoyance, taking it out on anything and everyone in his path. So he can't function without his pipe. Thus he keeps spares...a lot of them. The cocktail is one he made himself to find something that would satisfy his hunger for it.
He's 6' 5'' minus antennears and the buttons on his belt act as weapon teleporters for if he's not in the fighter jet and needs to fight one on one. He can teleport any of his weapons to hand by pressing buttons on his belt. Hand to hand combat he can do but he's not so good at it since he's never had reason to practise. He also has 5inch sythe like claws for hand to hand combat. 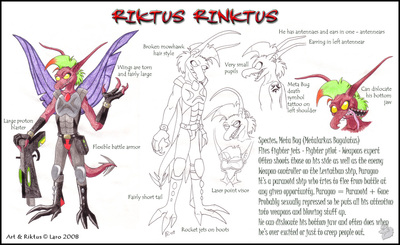 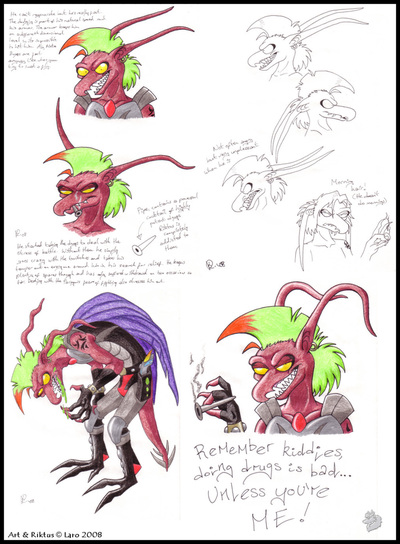 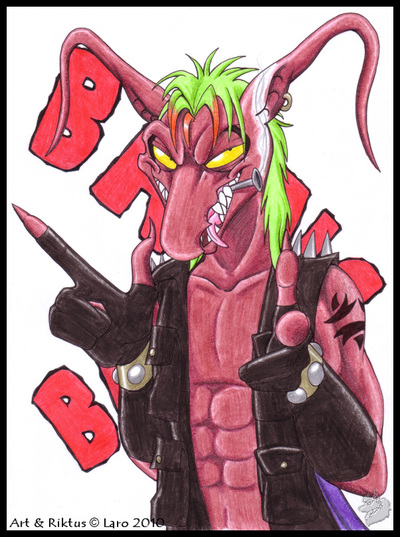 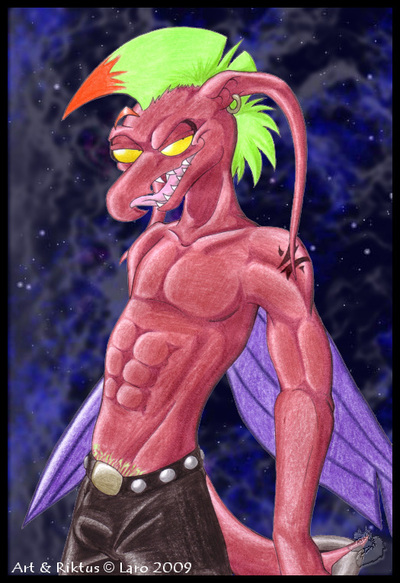 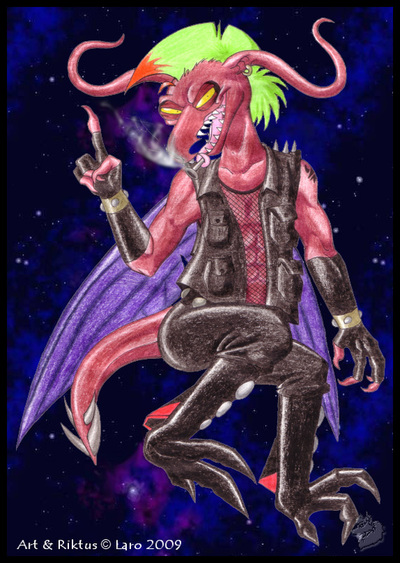 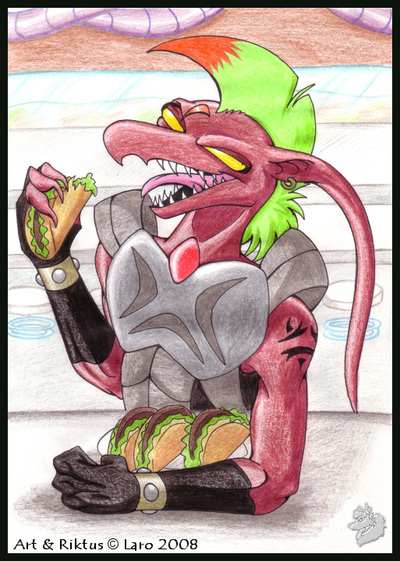 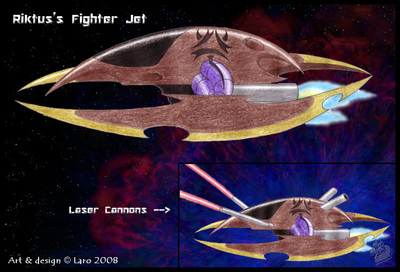 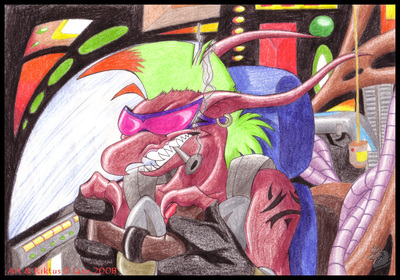 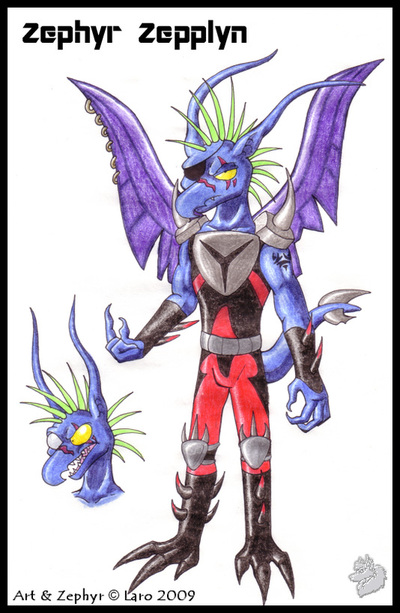 My first ever animation with audio! It's only short. Riktus says "Guess What? I Don't Care." The original animation has 29 different frames, two are used twice for the first blink. I'm really proud of this. I've done many animations in the past, including talking ones but this is the first time I've ever put audio to one.
Yes, I did his voice. I need to work on his voice. He has a gritty, grotty British accent.
Disclaimer: All artwork is © Lara Ryan. DO NOT take, redistribute, alter or claim the characters as your own. Ask permission if you would like to use my images and always give me credit if you do. Lack of imagination is not an excuse, plagiarism is a crime.
Riktus is © Lara Ryan 2008-2022.
Powered by